Airbus Group SE wants to become a major player in the fast-growing global drone industry, said its chief executive, Tom Enders, after years of missteps by the European plane maker that have left rivals with the upper hand.

Airbus is no longer content to sit on the sidelines while rivals around the world capture burgeoning markets for military and commercial unmanned aircraft, Mr. Enders said Tuesday during an interview.

“It’s hard to imagine” Airbus eventually “not having a strong footing” in at least some of those businesses, he said, disclosing that a high-level management review is currently assessing various strategic options.

The issue is shaping up as an early test of efforts by Mr. Enders to make Europe’s largest aerospace company more entrepreneurial by better sharing expertise among company operations and reaching out to technology startups to foster creativity.

“We have produced some (drone) demonstrators over the years” and have experience operating them, Mr. Enders said, but Airbus has refrained from publicly emphasizing its ambitions partly because “we are not in a very strong position” yet when it comes to large-scale projects. 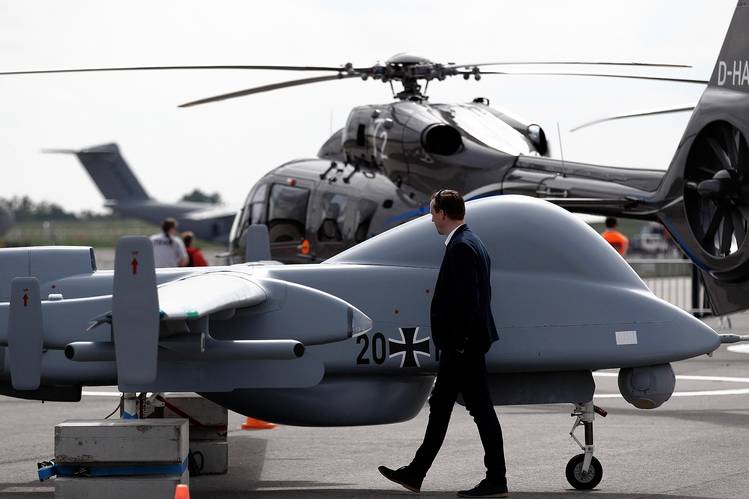 ENLARGE
Airbus is considering how much focus to put on commercial drones versus military models. Photo: Tobias Schwarz/Reuters

A new strategy may come within months. Mr. Enders declined to elaborate on the specifics of the internal review, though he emphasized that at the top of Airbus, there already is a strong feeling “it’s a must to be in this area.” And he predicted a clearly-defined plan will emerge before the end of the year.

The annual market for drones, excluding the smallest systems used principally by hobbyists, should increase from roughly $4 billion last year to $14 billion by the middle of the next decade, with $93 billion total spent over roughly the next 10 years, according to estimates by the Teal Group, a Fairfax, Va.-based aerospace consultant.

Airbus, the world’s second-largest commercial airplane builder after Boeing Co. , is considering how much focus to put on commercial drones versus military models, Mr. Enders said.

In addition, Airbus officials are weighing how much they are willing to commit in direct investment to develop a suite of new drones for public and corporate uses, according to another industry official familiar with the process. Despite previous stumbles, the company also may try again to pursue the time-consuming process of building a consensus among various European states to share the costs of potential government models.

Germany, France, Italy and Spain last year agreed to study possible work on a joint military drone, though concrete plans to develop and buy such a system aren’t set, and national elections could upset even preliminary agreements.

To jump-start its efforts, Airbus also could choose to acquire or partner with an established drone maker, according to industry officials.

Airbus last year set up a venture-capital business and pledged an initial $150 million investment in “disruptive and innovative business opportunities.” Local Motor Inc. a Phoenix-based company that uses digital manufacturing techniques to build appliances and vehicles from crowdsourced designs, became its first investment. The two since have launched a drone challenge to seek design ideas for drones to deliver medical supplies in emergencies. More than 200 entries already have been received.

Airbus has made attempts in the past to become a drone powerhouse and spent years and millions of dollars trying to catch up with U.S. and Israeli rivals with little success.

It sold a military drone to the French air force more than a decade ago, though that was based on an Israeli design. The French air force has since acquired Reaper drones from General Atomics and turned to French supplier Safran SA for smaller unmanned surveillance aircraft.

An Airbus campaign to win backing from Germany and other European countries for development of a homegrown surveillance drone, called Talarion, also flopped. Potential customers balked at the program’s proposed cost and schedule. France and the U.K., two of the countries Airbus hoped to enlist, since have embarked on a bilateral drone program being developed by rivals BAE Systems PLC and France’s Dassault Aviation SA .

A program to sell the German air force a high-altitude spy drone in partnership with Northrop faltered in 2013 amid concerns over rising costs and technical issues.Through the years, Airbus was frustrated by the fragmented nature of Europe’s decision-making with regard to long-term drone acquisitions. That same hurdle could pose a major challenge for its latest initiatives.

Yet, Airbus has remained active in building prototypes and researching unmanned aircraft. It worked on some experimental, solar-powered drones intended to fly extremely slowly and remain aloft for up to 90 days at a time. In February, the company led an industrial consortium to work with the European Union on integrating drones into the region’s airspace.

Efforts to build up its drone market share come after Mr. Enders decided to focus Airbus increasingly on aerospace activities and shed other operations.

The company this year announced it would sell its defense-electronics operations to private equity group KKR & Co. for about $1.25 billion. It also may shed border-security activities no longer seen as core for the company.