COBRA uses multispectral sensors to detect and localize mine fields and obstacles in the surf zone and beach zone prior to Marine amphibious assault. 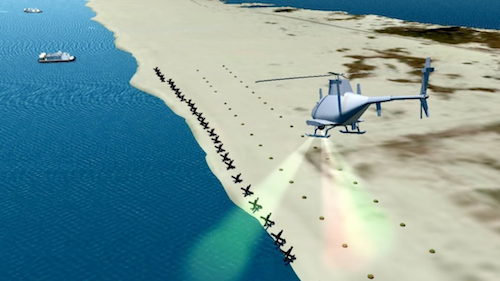 Carried on the Navy Northrop Grumman MQ-8 Fire Scout unmanned helicopter, the sensor system has limited detection capability in the surf zone. It enables operators and personnel to remain at safe distances for mine detection. COBRA will be deployed from the littoral combat ship and is an integral part of the ship’s mine countermeasures mission package.

COBRA uses multispectral sensors to conduct unmanned aerial tactical reconnaissance to detect and localize mine fields and obstacles in the surf zone and beach zone prior to amphibious assault.

A multispectral image contains data within specific wavelength ranges to extract information the human eye fails to capture with its receptors for red, green and blue. It measures light in 3 to 15 spectral bands to help detect otherwise-invisible mines.

The AN/DVS-1 COBRA passive multispectral sensor system is for unmanned helicopters to perform daytime surface-laid mine line and obstacle detection in the beach zone, and has off-board processing, Arete experts say.

The gimbal is about 19 inches long and 11 inches in diameter, and collects six different color-band images across a large area using a step-stare pattern. At the mission, personnel load its data storage unit into a post mission analysis station.

The COBRA Block I system has two airborne payloads, the post mission analysis station, and the tactical control system segment for the UAV ground control station to plan the flight tracks for the COBRA mission, monitor the mission, and reprogram the flight path if necessary.

COBRA began as a U.S. Marine Corps advanced technology program in the 1990s. The system uses incremental development, with three initial blocks of development planned with each introducing new or enhanced capabilities. COBRA Blocks II and III are in concept refinement and technology development.

On this order Arete Associates will do the work in Tucson, Ariz.; Destin, Fla.; and Santa Rosa, Calif., and should be finished by July 2022. For more information contact Arete Associates online at http://arete.com, or the Naval Surface Warfare Center Panama City Division at www.navsea.navy.mil/Home/Warfare-Centers/NSWC-Panama-City.