Big Macs From Above: Uber Plans to Deliver McDonald’s Via Drone

The drone delivery of everyday items is starting to take off with services from companies including Flytrex and Google. But the most successful programs have been medical in nature.

This week another technology giant has announced bold intentions in the drone delivery space: Uber. At the Uber Elevate conference in Washington DC, the ride-sharing and now food delivery giant set out plans to test the first commercial application of drone food delivery in high-density urban areas.

Uber Eats says the first customer tests will “showcase what the future of food delivery will look like.”

The foundations for Uber Eats’ trials were put in place in 2018, with tests over water and secure environments in an effort to develop a rugged and reliable aerial delivery solution.

In late 2018 Uber began working with San Diego State University on a series of trials to transport food using drones as an integrated part of their Uber Eats delivery network.

That integration is important. Rather than replacing the need for couriers on the ground, Uber Eats sees more value (and likely more regulatory leeway) in making the drone a part of the supply chain from restaurant to customer. This removes/reduces many of the ‘last mile’ issues: direct interaction between drone and customer, possible interference and the inevitable limitations that come with operating in busy urban areas.

Eventually, Uber Eats wants to make its drivers’ vehicles the designated landing pads for drones to drop food off on.

“There have been many attempts at drone delivery: landing on mailboxes and in backyards with parachutes attached,” Luke Fischer, Uber Elevate’s head of flight operations, said on stage at Elevate 2019. 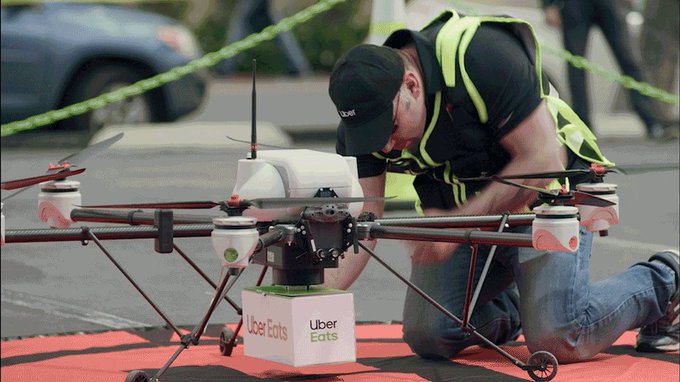 The FAA is slowly but surely giving airspace access to companies experimenting with drone deliveries. Google has approval to make commercial deliveries in Blacksburg, Va. Amazon is back on the scene with an ambitious delivery service schedule.

“The FAA is working hard to create a pathway that will enable this kind of technology,” Fischer said. “So despite the potential customer experience improvements from facilitating your delivery, we would not be pursuing this without the organization structure of the FAA’s UAS program.” Uber’s McDonald’s deliveries will begin later this year in San Diego, following an extensive process of package design and flight path planning. Uber has also confirmed that two other local fine-dining restaurants are set to join the program.

“Our goal is to expand Uber Eats drone delivery so we can provide more options to more people at the tap of a button,” Fischer said. “We believe that Uber is uniquely positioned to take on this challenge as we’re able to leverage the Uber Eats network of restaurant partners and delivery partners as well as the aviation experience and technology of Uber Elevate.”
https://dronelife.com/2019/06/13/big-macs-from-above-uber-plans-to-deliver-mcdonalds-via-drone/
Dr. Hans C. Mumm