ABOARD THE COAST GUARD CUTTER STRATTON, eastern Pacific Ocean — The drone is loaded onto a catapult on the flight deck. From a control room, a technician revs the motor until the go-ahead is given to press the red button. Then the ScanEagle UAV lifts off with a whoosh and, true to its lofty name, soars majestically over the wide blue sea.

The U.S. Coast Guard cutter Stratton is steaming more than 500 miles south of the Guatemala-El Salvador border, along the biggest narcotics smuggling corridor in the world.

It is a monumental task that has grown even larger in the past few years because of a boom in coca production in Colombia. But the Coast Guard is bringing more intelligence and technology to bear.

Deep within the 418-foot Stratton, which is based in Alameda, California, specialists crunch data from radar, infrared video, helicopter sorties and now the Boeing-made ScanEagle, which was deployed aboard the Coast Guard cutter for the first time during this three-month mission.

“In the earlier days, when you wouldn’t see or catch anything, we used to pat ourselves on our back and say we must’ve deterred them,” said Adm. Paul Zukunft, commandant of the Coast Guard, who has more than four decades at sea. “Now rarely 72 hours go by when you don’t have an event or we send a ship down there that doesn’t come back with multiple interdictions.”

The Associated Press spent two weeks in February and March aboard the Stratton, the most advanced ship in the Coast Guard fleet, as 100-plus crew members patrolled the eastern Pacific, through which about 70 percent of the cocaine consumed in the U.S. passes.

With three to five Coast Guard cutters covering 6 million square miles — from the Caribbean and the Gulf of Mexico to the eastern Pacific Ocean — it’s like having a few police cars watch over the entire lower 48 states.

Just after lunch on the second day of deployment, the Stratton’s PA system starts piping out acronyms. A TOI, or target of interest, has been detected by the ScanEagle with the support of aircraft radar, and a go-fast boat slides down a rear ramp into the blue waters to begin the chase.

In just a few minutes it catches up with a fishing boat, called a panga, with two outboard motors.

Sometimes smugglers frantically dump their cargo over the side or try to make a run for it, forcing their pursuers to fire warning shots or shoot out their engines. But this time, the boat’s crewmen, some of them barefoot, offer no resistance.

The four suspected smugglers sit handcuffed as a Coast Guardsman takes out some vials to conduct a chemical test. The results come back positive for cocaine, and the two Colombians and two Ecuadoreans are put aboard the cutter.

Hidden in the bales of cocaine is a GPS tracking device in a condom, a sure sign the drug bosses behind the shipment knew right away it didn’t reach its destination.

At sunset, the Stratton’s crew proudly poses for a picture with the haul while a black plume rises above the sea where the boat was set ablaze by the Coast Guard. A few hours later, the Stratton fires its cannon and sinks the vessel. 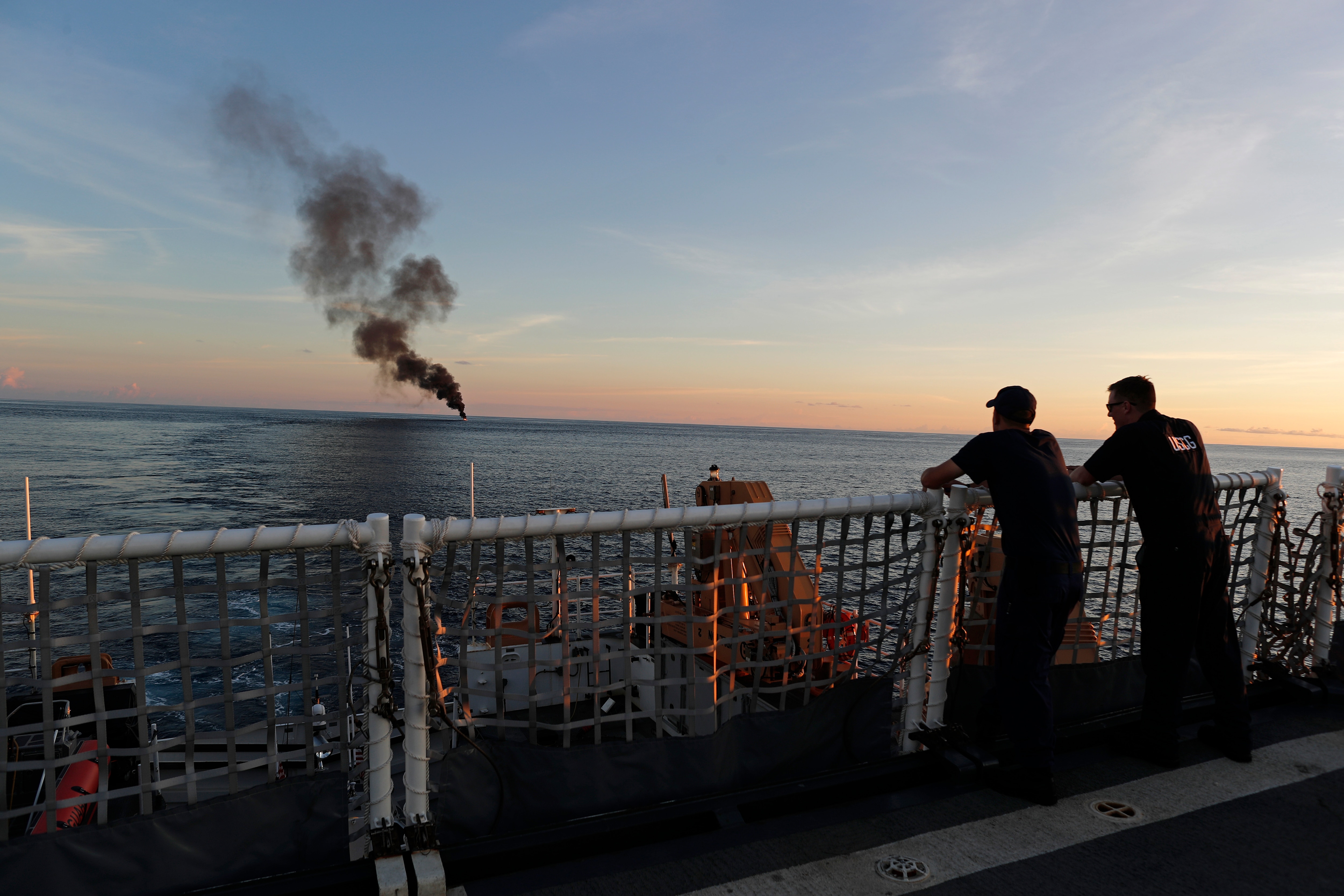 Two Coast Guardsmen watch from the U.S. Coast Guard cutter Stratton as a small fishing boat was set ablaze by the Coast Guard after close to 700 kilograms of cocaine were seized and four men were detained.Photo Credit: Dario Lopez-Mills/AP
The next morning the ever-rising Narcometer in the on-board newsletter reflects the size of the bust: 700 kilograms (more than 1,500 pounds) of pure cocaine with a wholesale value of $21 million. On the streets in the U.S., it could be worth more than five times that.

The Stratton’s biggest bust — a Coast Guard record — came in 2015, when it found more than 16,000 pounds of cocaine worth $225 million before the smuggling craft, a hard-to-detect semi-submersible vessel, sank with some of its cargo still aboard.

As good as the Coast Guard gets, its victories seem doomed to be short-lived. That’s because hundreds of miles to the south, in the jungles of Colombia, there’s a bumper harvest taking place. And Colombia is virtually the only source of cocaine smuggled by sea in small vessels.

That, along with better technology, may help explain why the Coast Guard has been coming back with ever-larger hauls. It set a record in 2016, seizing more than 240 tons of cocaine with a wholesale value of $5.9 billion and arresting 585 smugglers.

Last year, the amount of land devoted to coca cultivation in Colombia climbed 18 percent to an estimated 188,000 hectares (465,000 acres), according to a White House report. That is more coca production than at any time since the U.S. in 1999 began investing billions in an anti-narcotics strategy known as Plan Colombia.

“What we know here out at sea is that the business has been really good in the last couple of years,” said Capt. Nathan Moore, the Stratton’s skipper. 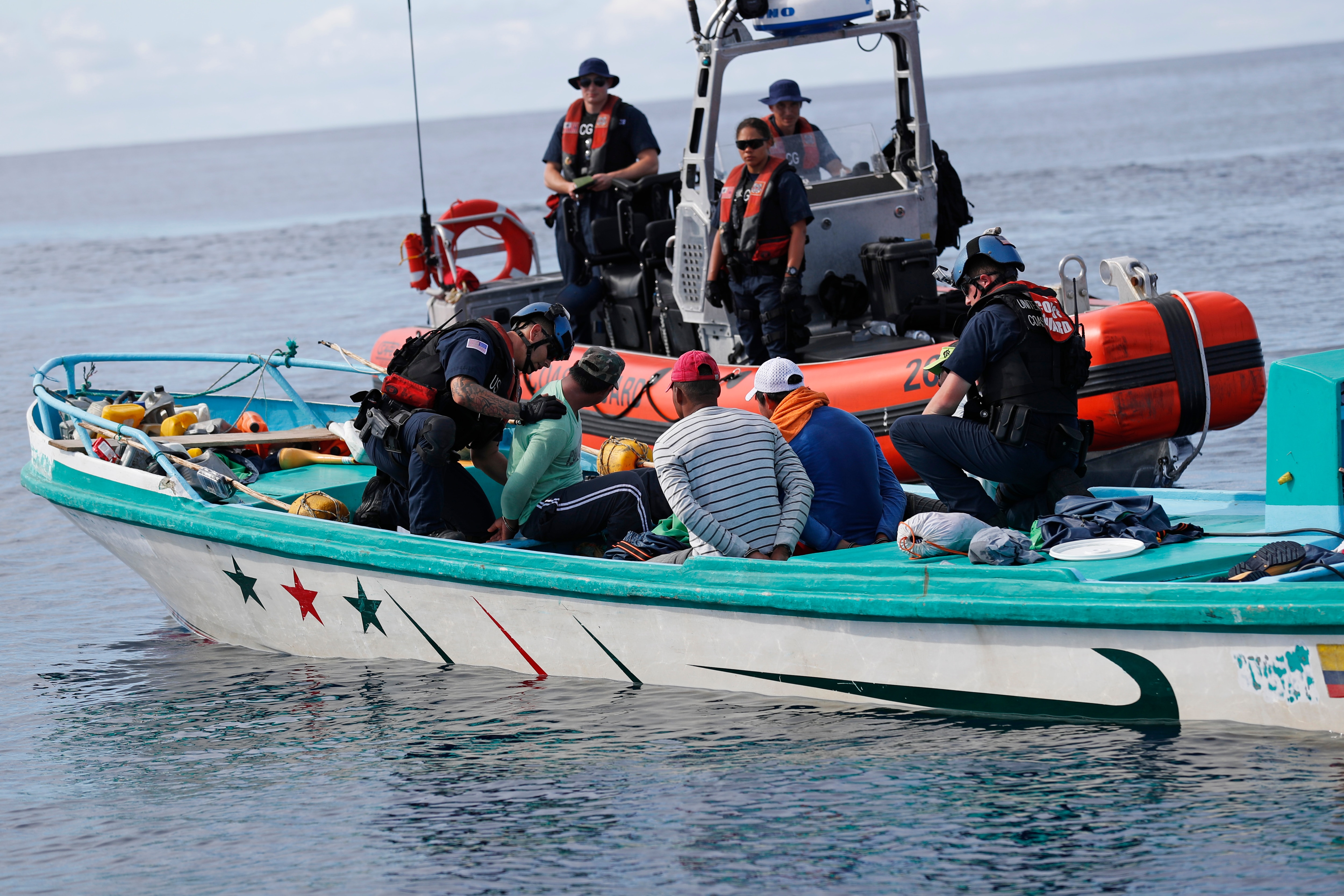 A U.S. Coast Guard law enforcement team from the cutter Stratton boards a small fishing boat that was stopped for inspection in the Pacific Ocean, hundreds of miles south of the Guatemala-El Salvador border. The four suspected smugglers, two Colombians and two Ecuadoreans, were transporting approximately 700 kilos of pure cocaine.Photo Credit: Dario Lopez-Mills/AP
The surge is being driven in part by Colombia’s decision in 2015 to suspend aerial spraying of crop-destroying herbicides because of health concerns.

At the same time, there was a rush among peasant farmers to start growing coca so they could take advantage of generous payments to switch to legal crops being offered as part of a peace deal between the government and Colombia’s rebels.

Thus far, 55,000 families have signed pledges to rip up 48,000 hectares of coca in exchange for as much as $12,000 over two years. The government is also expanding manual eradication of coca, a slower and far more dangerous task, with the goal of destroying 50,000 hectares this year alone.

But many experts are skeptical that poor farmers will renounce coca growing, especially as criminal gangs fill the void left by the retreating rebels. Also, a successful drug run can net each smuggler a small fortune that makes it well worth the risk of a long prison sentence for many.

Such dynamics help explain why, despite the Coast Guard’s technological superiority, four drug-running boats are thought to get through for every one caught, Zukunft said.

Those taken into custody for smuggling are put in white hazmat suits, given health exams and then led into a converted helicopter hangar aboard the Stratton, where they are shackled to the floor and issued a wool blanket, toiletries, and a cot or a foam mat. Eventually they are flown to the U.S. and prosecuted at American expense.

The alternative would be to seek prosecution in Central American countries such as Honduras, where the vast majority of crimes go unpunished.

More than a dozen nations in Central and South America have essentially outsourced their drug-interdiction efforts to the U.S.

“Imagine you’re out at Ocean City, Maryland, and then out of nowhere comes this foreign helicopter and it starts peppering a U.S. recreational boat with automatic machine gun fire and sniper fire. We would say it’s an act of war,” Zukunft said.

“But that’s the faith and confidence these countries have in the U.S. and our Coast Guard.”