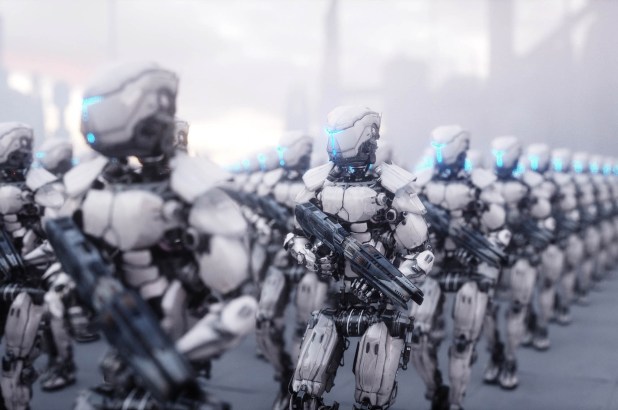 Just two weeks after it was announced China was developing biologically enhanced super soldiers, France has joined the fray in creating terminator troops that can be “bred to kill” according to a new report.

Last week, France gave the go-ahead for augmented soldiers, and some fear the super troopers could be the new norm in the recent future.

The French seek to improve “physical, cognitive, perceptive and psychological capacities,” and could allow for location tracking or connectivity with weapons systems and other soldiers. Among the ministry’s research were drugs to keep troops awake for long periods of time and combat stress, and even surgery to improve hearing.

The new species of augmented soldiers, dubbed “homo robocopus” could also have altered DNA to give them enhanced speed and strength as well as robotics.

Michael Clarke, visiting professor in war studies at Kings College London (KCL), told the Sun participating could be “using DNA as a farmer would in a herd of cattle.”

“We’ve reached the point now where we could potentially manipulate people’s DNA to breed into them extra strength, endurance and other things just as we do with animals,” Clarke said. “Just as we’ve done with standard cattle to give them more back, we can do that now very precisely with humans.”

Clarke added that the bio-race is being fueled internationally due to fears of China’s program.

“What they’re all thinking about is what might come up in 30 years’ time, given another 10 years development and experimentation,” Clarke told the paper. “The Chinese in 30 years’ time might have a cohort of people who are 20 years old who’ve got particular characteristics they might have tried to breed into them by manipulating DNA.”

Due to DNA manipulation, future soldiers could also be immune to disease and feelings.

A recent report by the International Society for Military Ethics in Europe obtained by the Sun, reveals a dystopic arena full of bionic men capable of fighting “all the time.”

“Enhanced soldiers would be reduced to bionic men, who run fast, do not need sleep, eat and drink very little, and can fight all the time,” the report states. “A new species is born: Homo robocopus.”

Sir Lawrence Freedman, Professor of war studies at KCL, told the Sun robotics are of more importance: “There are people going back into combat in ways they wouldn’t have been able to before because prosthetics have been improved. You can use Google glasses, there’s lots of things you can now do with a modern soldier that makes them much more effective than they were in the past. If you want people to act just according to orders going in to great danger, the other trend you can see that is pretty active at the moment is drones, autonomous vehicles and so on.”

While France claims it will abide by humanitarian law, French armed forces minister Florence Parly warned, “we have to be clear, not everyone has the same scruples as us and we have to prepare ourselves for such a future,” she said.

Here is some of the tech in progress to create “homo robocopus,” according to the Sun.

Brain microchips — France has been given the all-clear to develop microchips to enhance soldier brain power.

Super hearing — The US’s Tactical Communication and Protective System are smart earbuds which boost soldiers’ hearing to be near superhuman.

Exoskeleton legs — The US Army has tested an exoskeleton which can be attached to soldier’s legs and can increase their productivity by up to 27 times.

Synthetic blood — Respirocyte is a theoretical red blood cell that could help soldiers not get out of breath and stay underwater for hours.

Pain immunity — DARPA’s Persistence in Combat initiative would allow soldiers to have their pain suppressed for 30 days.