A drone attack at one of the UK’s busiest airports has left tens of thousands of passengers facing major disruption.

Gatwick’s runway has been shut since Wednesday night, when two devices were seen flying over the perimeter fence.

Police were still hunting for the drone operator after another device was reported just before 07:00 GMT.

Those due to travel have been told to check the status of their flight, while Easyjet told its passengers not to go to Gatwick if their flights have been cancelled.

Sussex Police said it was not terror-related but a “deliberate act” of disruption.

Dr Alan McKenna, from the University of Kent, said the drones appeared to be “of an industrial size” not “one you can buy from the shops”.

The shutdown started just after 21:00 on Wednesday, when two drones were spotted flying “over the perimeter fence and into where the runway operates from”.

The runway briefly reopened at 03:01 but was closed again about 45 minutes later amid “a further sighting of drones”.

Gatwick chief operating officer Chris Woodroofe said: “The police are looking for the operator and that is the way to disable the drone.”

He said police had not wanted to shoot the devices down because of the risk from stray bullets.

How have passengers been affected?

About 10,000 passengers were affected overnight on Wednesday and Gatwick said 110,000 people were due to either take off or land at the airport on Thursday.

Crowds of travellers have spent the morning waiting inside Gatwick’s terminal for updates, while others reported being stuck on grounded planes for hours.

A Gatwick spokeswoman said extra staff had been brought in and the airport was “trying their best” to provide food and water to those who needed it.

A number of flights bound for Gatwick were diverted to other airports overnight, including seven to Luton, 11 to Stansted and five to Manchester. Other flights have landed at Cardiff, Birmingham and Southend.

Kasia Jaworska told the BBC she was travelling from Glasgow to Gatwick with her boyfriend when her flight was diverted to Luton.

She said she thought it was “strange” that two drones had led to the closure of the airport.

“You would imagine there would be better security in place and emergency action for something like that,” she said.

Christopher Lister, who had been returning from Kiev, posted a picture of people sleeping “on every seat and across the floors” on board his flight.

He said the photo was taken six hours after the plane – which was due to arrive at Gatwick – landed in Birmingham. 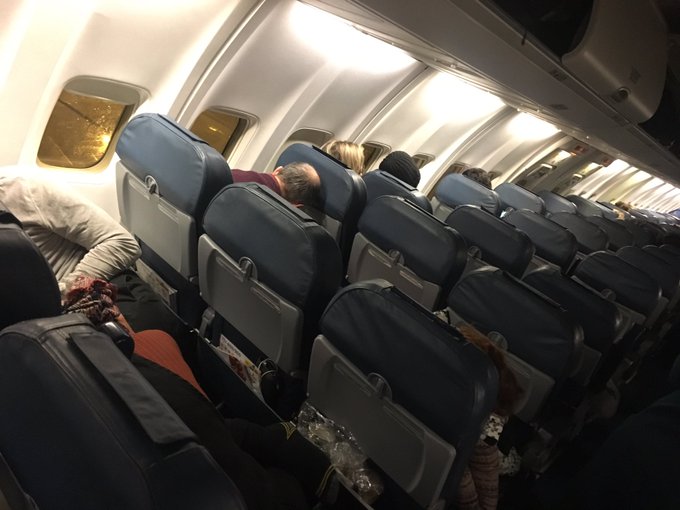 Luke McComiskie, whose flight ended up in Manchester, described chaotic scenes as people tried to find their way home after more than three hours stuck onboard.

The 20-year-old, from Aldershot, said: “We got told there would be some arrangements with coaches for us when we get out the terminal.

“It was just chaos and they had only two coaches and taxis charging people £600 to get to Gatwick.”

Airports and drones: The law

It is illegal to fly a drone within 1km of an airport or airfield boundary and flying above 400ft (120m) – which increases the risk of a collision with a manned aircraft – is also banned.

Endangering the safety of an aircraft is a criminal offence which can carry a prison sentence of five years.

The number of aircraft incidents involving drones has grown dramatically in the past few years. In 2013 there were zero incidents, compared to almost 100 last year.

Civilian drones have grown popular as their price has fallen. Technological improvement has meant components are smaller, faster and cheaper than ever before.

The UK Airprox Board assesses incidents involving drones and keeps a log of all reports.

In one incident last year, for example, a pilot flying over Manchester saw a red “football-sized” drone passing down the left hand side of the aircraft.

In another, a plane leaving Glasgow narrowly missed a drone. The pilot, in that case, said the crew only had three seconds of warning and there was “no time to take avoiding action