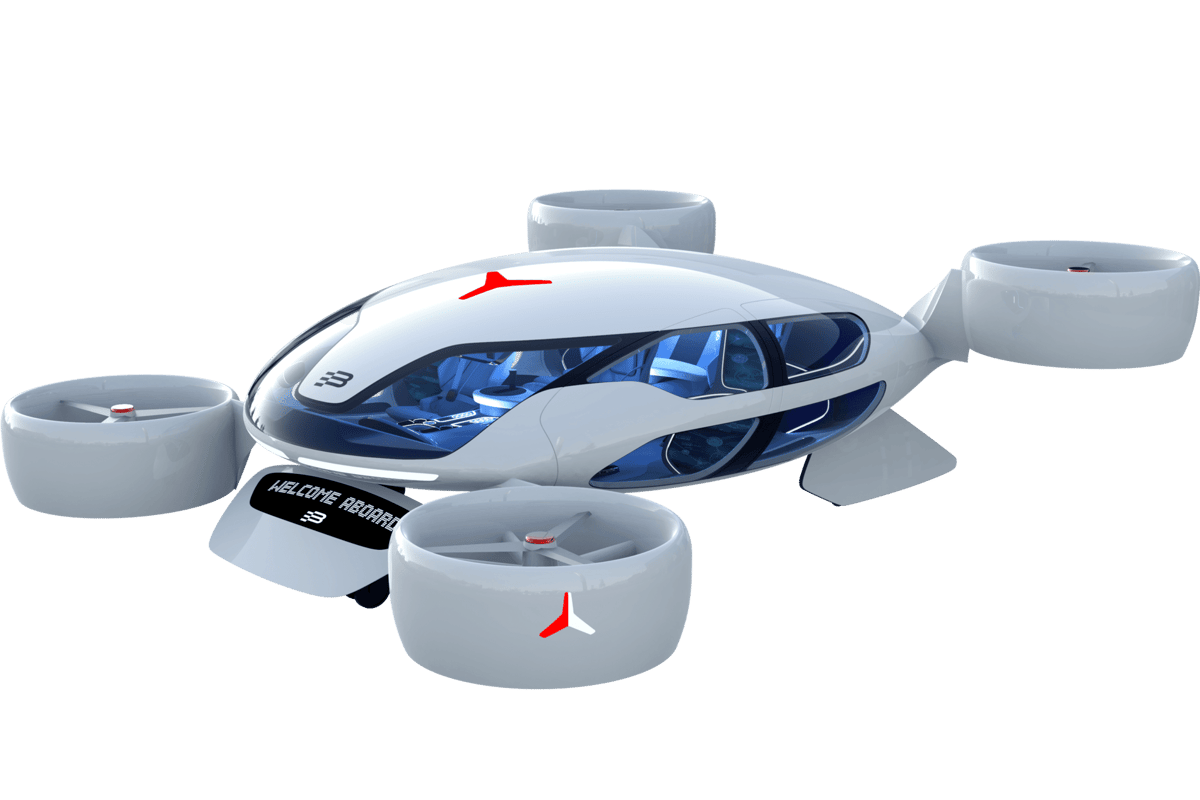 Weight is everything in aviation, and it’s even more important when you’re talking about energy-intensive vertical takeoff and landing like the coming eVTOL air taxi contenders are promising. Nearly every company on that list is building its prototypes using lithium batteries, but the simple fact is, lithium batteries have terrible energy density.

Commercial air taxis will need to fly all day, not spend long hours hooked up to charging stations, so every company that’s planning around lithium is praying for a magical new chemistry to emerge from a test lab that doubles or triples the capacity of the best batteries available today.

That may well happen, but hydrogen is beginning to look like an excellent alternative. It’s a pain in the butt when it comes to ground transport, but in electric aviation it might find a perfect use case. It offers much higher energy density, promising excellent flight endurance, and it lets you fill up with fuel in minutes, just like topping up your car’s gas tank.

Indeed, some businesses are starting to bet on it. US East Coast eVTOL startup Skai is racing to be early to market with a six-rotor, five-seat aircraft it says will be capable of four hours or 400 miles (644 km) in the air before you’ll need to top up the hydrogen tanks. But an American startup says one piece of the puzzle is still missing for the perfect eVTOL powertrain: a lightweight, high-power fuel cell design.

To very quickly recap how a fuel cell works in the most basic terms, hydrogen is fed in to the anode side, where a platinum catalyst splits it from H2 into positively charged hydrogen ions, or protons, and negatively charged electrons. A proton exchange membrane allows only the protons through to the cathode side, creating an electrical potential that pulls the electrons through to the other side along an external path. This external path is where you place your electrical load.

When the electrons arrive on the other side, they meet the protons in the presence of oxygen and a second electrochemical reaction occurs to create water. Pure water flows out of the fuel cell and is the only “exhaust” from the process per se.

Which brings us to HyPoint, a California-headquartered startup run by three Sergeis and an Alex, the latter of which caught up with us for a video call from his home, where he’s waiting out the COVID lockdown.

Starting out in 2018, HyPoint set out to create low-temperature proton exchange membrane (LTPEM) fuel cell systems for industrial-grade drone systems. But since moving to Silicon Valley and being accepted into the Alchemist Accelerator program, the company began looking at a bigger target.

“When we arrived in the United States we saw a huge potential market in urban air mobility,” says CEO Alex Ivanenko, PhD. “The main drivers of this market are mobility, compactness and energy density. Now, the main powertrains are built on lithium batteries, which have a fundamental technical barrier. Existing lithium batteries have a low energy density, while existing fuel cells have low specific power. The air transport market requires both high specific power and high energy density. There’s no power source that can satisfy both requirements at the same time. Not lithium, not fuel cells.”

Forecasting that suitable lithium battery technology might be as much as 15 years away, the HyPoint team began focusing its efforts on a fuel cell design specifically targeted at eVTOLs. To keep things lightweight, it would have to be an air-cooled design; liquid-cooled fuel cells, says Ivanenko, work well in the automotive world, but the associated coolant tanks and pumps add parasitic mass that literally isn’t going to fly in the aviation world.

But today’s available air-cooled fuel cells, he says, have limited power capacity and lifespan, and they only work in temperatures between -5 and 30 °C (23 and 86 °F). So the HyPoint team set out to develop something faster and hardier, and came up with what they call the “turbo air-cooled fuel cell.”

“We boost the power of the fuel cell stack by placing it inside an air duct, where pressurized, humidified and thermally stabilized air is circulated by fans,” says Ivanenko. “The compression of air is maintained about 3 bars inside by a compression system, and the air with reduced oxygen content is charged through a control valve, and replaced with fresh compressed air with normal oxygen content.”

The extra oxygen on the cathode side of the fuel cell stack, in conjunction with a new High Temperature Proton Exchange Membrane (HTPEM) technology HyPoint has developed, allows you to force three times as much hydrogen through the fuel cell as a traditional design, tripling its specific power output without adding any parasitic cooling mass that might weigh a VTOL aircraft down.

With the entire system taken into account, the HyPoint system delivers 2,000 watts of power per kilogram (2.2 lb) of mass. The best of the liquid-cooled fuel cells deliver between 150-800 W/kg, and other air-cooled fuel cells sit at about 800 W/kg.

The energy density of the full system comes in at around 960 Wh/kg, where lithium batteries typically sit at about a third of that figure and other air- and liquid-cooled fuel cell systems come in a little over half – all according to HyPoint’s own figures.

The system has some other huge benefits as well, says Ivanenko; it accepts “dirty” hydrogen that’s only 99 percent pure, which is a fraction of the cost of the 99.999 percent purified hydrogen you need for an LPTEM system. “That’s a huge decrease in a significant operational parameter for a commercial eVTOL operation,” he adds.

It works at more or less any real-world temperature, from -50 to +50 °C (-58 to 122 °F) and beyond. And while it’s still in the lab at this stage, the team projects these fuel cells will last some 20,000 hours without maintenance, where LTPEM systems typically last around 5,000 hours – another very significant factor for a commercial operator.

HyPoint has been in contact with a number of major players in the emerging eVTOL market in the US, Europe and Australia, says Ivanenko, but NDAs restrict him from mentioning them by name just yet, with the exception of ZeroAvia and Bartini.

“We’re seeing big interest from many companies,” he says. “We believe we’ve found a solution for them. Many of them are asking for us to validate our technology with a prototype, because we’ve only validated it in the lab so far. We agree with that. So our development plan for this year is to build a 15- to 20-kW prototype, to validate the technology. Then a full scale, say 150-200-kW system in 2022.”

Moving from a lithium-powered prototype to a hydrogen powertrain, he says, shouldn’t require a total redesign of most eVTOL airframes, so the opportunity to achieve long-range flights with fast refueling is open to more or less any of the contenders if they’re willing to move some things around inside the aircraft design.

What about safety? Will hydrogen eVTOLs be an explosion risk?

Mindful of our ever-alert commenters, some of whom vocally believe hydrogen has no place in aviation, we put the question of safety to Ivanenko, who immediately rolls his eyes, grins and mimes shooting himself in the head.

“That’s a common question from consumers,” he says. “And that’s OK, because I think most consumer technology will be too difficult to switch over to hydrogen technology anyway. That’s one of the reasons why we’re focused on B2B with large companies that care about efficiency.

“But yes, ‘it’s a hydrogen bomb! Remember the Hindenburg!’ That was in 1938. Almost a hundred years ago. What people need to understand is that hydrogen, oxygen, propane and natural gas are all in the same group of dangerous flammable gases. The propane bottle you use on your BBQ has the same warning certificate, it’s in the same class as hydrogen.

“There’s no special hazard class for hydrogen. Moreover, hydrogen is the lightest gas in the universe, and it can’t be concentrated in the field to achieve the kinds of dangerous concentrations that might cause a big boom. Of course, you should follow special safety rules, but you shouldn’t be afraid of hydrogen gas. Oxygen is much more dangerous.”

It’s possible that lithium battery technology will make a quantum leap in energy density in the next five years, which is roughly when most eVTOL companies are projecting they’ll be ready to start commercial air taxi flights. Maybe the batteries of 2025 will have huge capacities, light weight, ultra-fast charging and they’ll meet all the right safety criteria. But it’s very possible they won’t, and if that’s the case, hydrogen innovators like HyPoint could well find themselves in a highly advantageous position. Certainly a company to watch.