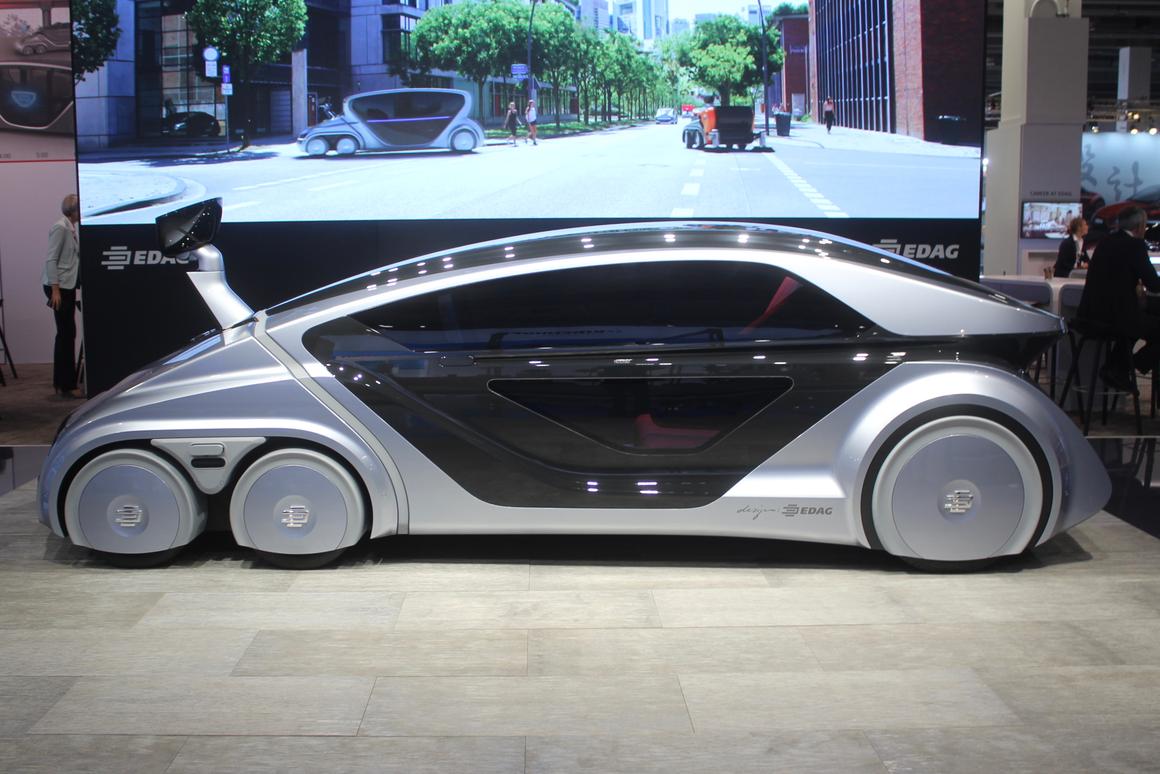 Sort of a German answer to Rinspeed, automotive engineering firm EDAG has a long history of introducing thought-provoking, outside-the-box concept cars, like skeletal 3D-printed light cars and pop-up sports car campers. In recent years, it’s been more content contributing to concepts and products from other brands, including Bosch. But it came back with a vengeance at this year’s Frankfurt Motor Show, revealing an intelligent, talking autonomous concept car that easily pairs with various modules to perform tasks of all types and sizes in and around urban spaces.

“Hello, I am CityBot, the future of mobility in cities. I am happy to answer any questions you may have.”

That’s merely a very loose paraphrase, because I found myself more focused on keeping upright after jumping back in surprise when EDAG’s IAA 2019 concept car started up a conversation with me. I had walked around the vehicle’s front corner in order to see what the weird arm sticking out of its hood was. Having not heard a peep about the concept car prior to spotting it at the show, my initial expectation was that the arm was some kind of a crane or work tool, which seemed to fit right in with the utilitarian six-wheeled profile. Needless to say, I wasn’t prepared for it to stare me dead in the eyes and start chatting.

My surprise quickly turned to a new kind of embarrassment, as I felt a little rude staring dumbfounded at this intriguing hunk of AI while it stared back waiting for me to respond. Not really the type to shoot the shit with a concept car on the floor of a crowded auto show, I slunk quietly away outside the bot’s view, grabbed a few more photos and went on my way, vowing to research it a little before ever coming face to face again.

Beyond just a talking robo car designed to fascinate children and spook journalists at auto shows, the CityBot is a vision for a fully networked urban mobility system. It’s also something of a 50th anniversary project for EDAG, which celebrates the milestone by doing something it does best: pushing the conversation forward with futuristic, boundary-smashing concept cars.

The CityBot isn’t actually a six-wheeled vehicle as it first appeared to be, and is instead a combination of drive and utility modules. The idea is that the four-wheeled autonomous cab, complete with its pop-up talking robot head, can pair with various trailers and “rucksacks,” performing a busy schedule of jobs throughout the day. The add-on utility modules include a passenger cell, different size and style cargo carriers, and cleaning modules. Using these different modules, the robo-drive cab can work tirelessly 24/7. A hydrogen fuel cell powertrain in place of the battery electric powertrain we’ve come to expect in autonomous concepts like this means that each drive module avoids harmful emissions while also spending less time hooked up to a refuelling station.

Not only is the CityBot a clean, quiet visionary vehicle for megacities, but EDAG positions it as the building block of an all-around smoother, more free-flowing solution for taxed urban mobility systems that are becoming less “mobile” by the day. By wearing a full variety of hats throughout the day and night, one CityBot can eliminate more than four privately owned cars on the road while meeting all the same transportation demands, according to EDAG. Instead of wasting hours sitting in a driveway or parking lot — 23 hours of a vehicle’s day, according to EDAG’s numbers — each drive module can be out working or moving people much or all of that time. EDAG imagines CityBots replacing not only private cars but municipal work vehicles, package delivery vans, waste management trucks and more.

Beyond eliminating 80 percent of the vehicles on the road, the networking and swarm intelligence of the CityBot system would further streamline traffic flow, eliminating gridlock. Couple that with on-demand vehicle ordering and digital payment processing, and the idea is to maintain the freedom and convenience of personal mobility while creating cleaner, freer, more livable cities in the face of continual population growth.

While many past EDAG concept cars have often been completely out there, EDAG isn’t alone in thinking that the future of urban mobility will center around autonomous, modular, multipurpose vehicles. The pop-up “avatar” positioned as a human-like means of interacting with people around the vehicle is a new twist, but the CityBot is quite similar to Scania’s NXT and the Snap concepts from Rinspeed.

All in all, the CityBot feels like a plausible way of addressing traffic, pollution and other problems of growing urban centers in the distant future. So maybe start preparing to make small talk with the car parked at the corner — you’ll feel less like a fish out of water than I did.