The idea involves wave-resistant medium-sized unmanned ships that sail in-line or in formation to move cargo or warfighters over the oceans safely. 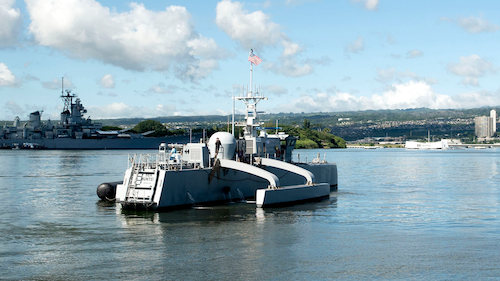 ARLINGTON, Va. – U.S. military researchers are trying to make it easier for military forces to cross the world’s oceans by using a system of connected unmanned surface vessels (USVs) that would act as trains across the seas.

This program seeks to enable extended transoceanic transit and long-range naval operations by capitalizing on the efficiencies of a system of wave-resistant connected vessels using a distributed fleet of tactical unmanned ships.

The idea is to deploy lines of medium-sized unmanned ships that could help reduce the forces of waves. Sea trains could be formed by physically connecting vessels loosely, or by sailing vessels in formations.

Sea Train has two technical areas: an integrated design of unmanned vessels; and a control and monitoring architecture to make the most of efficiencies.

Leaders of the U.S. Navy and Marine Corps are trying to shift from centralized operations on a few large manned surface ships to a distributed fleet of relatively small and low-risk vessels for safe ocean transit.

A key element of this operational shift is the growing application of unmanned surface ships for surveillance, logistics, electronic warfare (EW), expeditionary warfare, and offensive operations.

A key limitation of unmanned ships is their limited ranges because of the effects of large ocean waves on medium-sized vessels. At-sea refueling, heavy-lift ships, strategic airlift, and increased overall vessel size all are solutions to this limitation, but are vulnerable to enemy submarines, surface warships, and combat aircraft.

The project has three potential approaches: a connected sea train; a connectorless sea train; and a formation sea train.

The connected sea train has a physical connection between four or more vessels during transit to form a long parallel mid-body for the vessel to decrease the vulnerability to waves, while enabling the vessels to disconnected from time to time to conduct tactical missions.

The connectorless sea train uses compressive forces to keep four or more vessels together in a long parallel mid-body for the vessel to decrease the vulnerability to waves, while enabling the vessels to disconnect to conduct tactical missions.

The formation sea train involves four or more vessels moving together in groups formed closely front and back, and side to side, to exploit wave interference between the vessels.

The Sea Train project seeks to design a hull that makes the most of drag reduction; control surfaces for maneuvering and seakeeping; ways to connect to several medium-size unmanned ships; and low-drag propulsion.

The Sea Train’s control architecture should have real-time networked computers able to share information among vessels — especially by linking weather forecasts with path planning and seakeeping; and ways to monitor vessel performance.