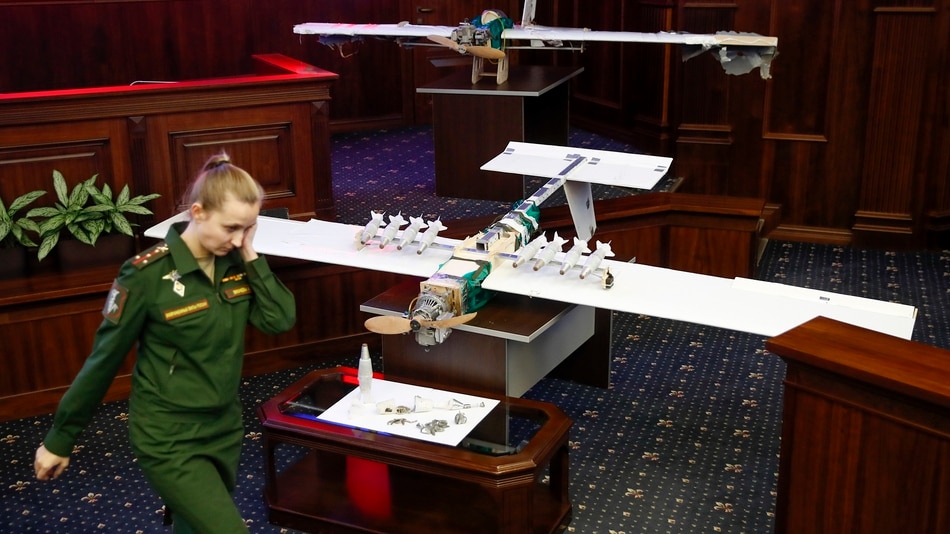 A Russian officer walks next to drones that allegedly attacked a Russian air base in Syria and were captured by the Russian military. They were displayed at a briefing in the Russian Defence Ministry in Moscow, Russia, on Jan. 11, 2018. (Pavel Golovkin/AP)

MOSCOW — Russia’s Defence Ministry on Thursday displayed a pair of drones that it said were captured following attacks on two Russian military bases in Syria, saying the attack required know-how, indicating it was carried out with outside assistance.

Russian President Vladimir Putin accused outside powers he wouldn’t name of staging the attack to derail a deal between Russia, Turkey and Iran that is intended to reduce hostilities in Syria.

The Defence Ministry said Saturday’s raid on the Hemeimeem air base in the province of Lattakia and Russia’s naval facility in the port of Tartus involved 13 drones. It said seven were downed by air defense systems and the remaining six were forced to land by Russian electronic warfare units.

Of the latter, three exploded when they hit the ground and three more were captured intact, the ministry said.

The Defence Ministry presented two primitive-looking drones at a briefing, arguing that they featured state-of-the art electronics that are less prone to jamming and allow precision strikes.

Maj. Gen. Alexander Novikov, who heads the ministry’s drone department, said the drones used in the weekend’s raid on the Russian bases differed from the rudimentary craft earlier used by rebels in Syria. The attack required satellite navigation data that aren’t available on the internet, complex engineering works and elaborate tests, Novikov said.

“The creation of drones of such class is impossible in makeshift conditions,” Novikov said. “Their development and use requires the involvement of experts with special training in the countries that manufacture and use drones.”

Novikov didn’t blame any specific country, but the Defence Ministry earlier referred to the “strange coincidence” of a U.S. military intelligence plane allegedly barraging over the Mediterranean Sea near the Russian bases when the attack took place.

The Pentagon strongly denied any involvement.

The Defence Ministry said the drones were launched from al-Mouazzara in Syria’s northwestern province of Idlib, more than 30 miles away from the Russian bases.

The attack heightened tensions between Russia and Turkey, which wields significant influence with some rebel groups in Idlib. The province has become the main rallying point for various rebel factions after Syrian government forces won control over large swathes of territory thanks to Russian support.

Russia has staunchly backed Syrian President Bashar Assad, and Turkey has supported his foes, but they struck a deal last year to set up de-escalation zones. The agreement has helped reduce fighting and warm ties between Moscow and Ankara. It also involved Iran, another backer of Assad.

Putin said Moscow knows who helped stage the attack on the Russian bases, but he didn’t identify the country allegedly involved, saying only that it wasn’t Turkey.

He added that he discussed the raid with Turkish President Recep Tayyip Erdogan earlier Thursday, voicing confidence that Turkey’s leadership and military had nothing to do with it.

“There were provocateurs, but they weren’t the Turks,” he said at a televised meeting with Russian newspaper editors Thursday. “We know who they were and how much they paid for that provocation.”

He added that those behind the attack were aiming to thwart the Russia-Turkey-Iran agreement on de-escalation zones. “These were provocations aimed at thwarting earlier agreements,” Putin said.

The drone raid on Russian bases came just weeks after Putin declared a victory in Syria and ordered a partial withdrawal of Russian forces from the country.

The attack occurred a few days after mortar and rocket shelling of the Hemeimeem air base. The incursions have raised doubts about the sustainability of the Assad government’s recent victories and Moscow’s ability to protect its gains in Syria.