Khosrowshahi announced the investment with a tweet, which included a photo of the chief executive alongside executives from SoftBank, Toyota, and Denso. According to the accompanying press release, the capital injection values Uber’s self-driving unit at $7.25 billion, ahead of the company’s official initial public offering likely later this year. Uber’s IPO, which does not yet have a set date, is expected to raise around $10 billion for the ride-hailing company and would value the company at as much as $100 billion, the WSJ reports.

The terms of the investment indicate Toyota and Denso are contributing $667 million collectively, while SoftBank’s Vision Fund is contributing $333 million. The deal should come as no surprise to those closely watching Uber’s finances; the company received a $500 million investment from Toyota back in August 2018 specifically to help accelerate its self-driving efforts, including putting a retrofitted fleet of Toyota Sienna’s on the road to test Uber’s autonomous technology and eventually deploy it commercially as soon as 2021.

“This investment and our strong partnership with the Toyota Group are a testament to the incredible work of our ATG team to date, and the exciting future ahead for this important project, alongside great partners,” Khosrowshahi said in a statement. “The development of automated driving technology will transform transportation as we know it, making our streets safer and our cities more livable. Today’s announcement, along with our ongoing OEM and supplier relationships, will help maintain Uber’s position at the forefront of that transformation.” 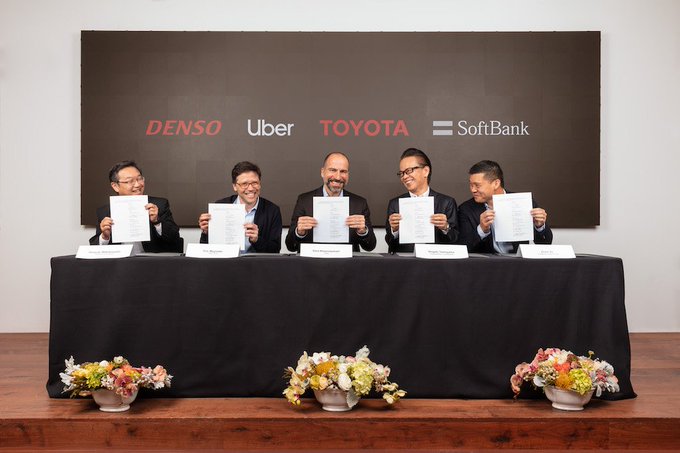 The funding is a sign of confidence in UberATG from the Japanese financial and automotive industries after a few years of bumpy stateside research and development. Just last month, the company avoided criminal charges in the first-ever death at the hands of an autonomous car, which took place in March of last year and claimed the life of 49-year-old Elaine Herzberg. The fatal accident ended Uber’s test program in Tempe, Arizona, but the company has since resumed testing in Pittsburgh, Pennsylvania, where UberATG is headquartered.

In addition to the crash, UberATG was embroiled in a contentious trade secrets lawsuit with competing self-driving company Waymo, owned by Google parent company Alphabet, a legal dispute that reached a surprise settlement last February after just a week of courtroom dealings. Due in part to the lawsuit, Uber shuttered its self-driving truck unit, although the company has kept the division’s engineers working on an in-house lidar project, and it continues to develop a software logistics platform for delivery companies called Uber Freight.