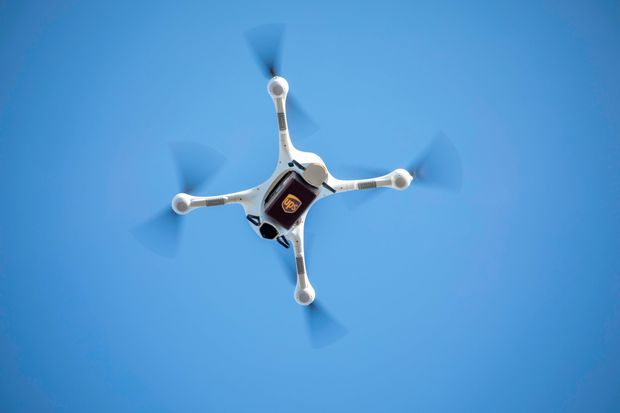 United Parcel Service Inc. UPS -0.49% said it received the first-of-its-kind federal approval to start setting up a fleet of unmanned aircraft to deliver health supplies and eventually consumer packages potentially throughout the U.S.

Under the Federal Aviation Administration’s announcement Tuesday, the company’s Flight Forward unit obtained an immediate green light to ship medical products and specimens in North Carolina across various hospital campuses. But the broad approval for an entire fleet of future drones and pilots on the ground—going beyond what the FAA approved previously—opens the door for many other types of longer-range applications spanning rural and suburban areas. The FAA approval doesn’t apply to urban areas.

Calling it a major step to enhance services for health-care customers and ultimately an array of other industries, the company said the FAA’s approval “has no limits on the size or scope of operations.” UPS said it already has started limited flying under the new certification.

“It just gives us a lot of capabilities,” David Abney, the company’s chairman and chief executive, said in an interview. “We’re going to move ahead quickly and expand rapidly,” he said, “It’s not going to be a small operation.” Within months, Mr. Abney predicts, the first phase could include 100 or more hospital complexes.

As delivery options expand, the company said future steps may include a single operator on the ground controlling multiple flights, or using drones to supplement traditional package delivery by trucks in rural areas.

The goal is to be the first drone operator to operate on a sizable scale, Mr. Abney added.

The FAA’s move comes months after it gave Alphabet Inc. ’s Wing Aviation unit initial authorization to fly a fleet of drones for consumer-goods deliveries. But that specific approval covered only a rural area around Blacksburg, Va., and mandated detailed scrutiny of applications for similar applications elsewhere.

By contrast, UPS said its certification offers a faster and easier path to case-by-case approvals of new uses. If that process proves successful, the latest step could set an important precedent in the budding, fiercely competitive drone industry’s quest to dramatically step up the frequency and breadth of services.

UPS intends, among other things, to establish an operations control center able to monitor a fleet of drones from a centralized location, eventually incorporating new technologies to help detect and avoid potential airborne collisions.

Amazon.com Inc. and Uber Technologies Inc. are among those companies vying for similar U.S. approvals to potentially transport food and small consumer goods to residential customers. Many of those firms have turned overseas to test preliminary delivery systems, citing accelerated regulatory action from Australia to Iceland to Switzerland.

Like Wing, UPS ultimately will be able to operate in the U.S. as something akin to a small charter or cargo carrier using conventional aircraft, featuring specific pilot-training programs and accident-prevention procedures.

But along with all other drone champions, the UPS initiative still faces major hurdles to rapid growth until the FAA establishes industrywide rules allowing flights over urban areas and sets standards for remote identification of drones by law enforcement and air-traffic control.

Those long-awaited regulations will be partly based on input from real-world flights and pilot programs championed by the Transportation Department and White House aides.

In a speech last month to an international drone conference in Las Vegas, Daniel Elwell, the FAA’s deputy administrator, said those lessons learned are “lighting a creative fire in the industry.” In testimony to a House appropriations subcommittee last week, Mr. Elwell said regulations establishing remote-identification requirements—viewed as the building blocks of predictable drone industry growth—initially were held up by a host of technical issues. But now “the rule is moving,” he said, as White House officials give the proposal a top-priority review.

Meanwhile, operators can seek broad certification such as UPS, or take up FAA invitations to apply for more-targeted waivers or exemptions under existing rules.