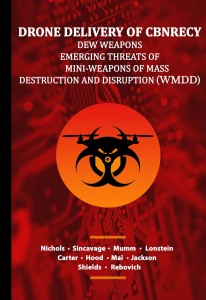 Available as free eBook at: https://newprairiepress.org/ebooks/46/

Our sixth title is a new purview for UAS / CUAS / UUV (drones). We are concerned with the future use of these inexpensive devices and their availability to maleficent actors. As I write this Preface, we are on the 56th day of the savage invasion of Ukraine by Russia under President Putin. The Russian drone fleet numbers are above 500. They have had five years to grow their fleet. It currently uses them for domestic security, Syrian operations, and defense. (Facon, 2016) In the conflict, Russian troops seriously outnumber Ukrainian forces. However, on February 8, 2022, a Forbes report stated that Ukraine used 20 Turkish TB-2 drones to hit Russian targets and offset some of Russia’s enormous military advantages. (Malsin, 2022) According to Fox News, on February 27, 2022, President Putin ordered nuclear deterrent forces status raised to “special combat readiness” (Colton, 2022)

News like this in just one conflict suggests that UASs in air and underwater will be the future of military operations. They can deliver a huge punch for a low investment and minimize human casualties. Our team believes that China is watching both the United States’ Neville Chamberlain appeasement strategy and the aggressive nature of Russia in its full-scale invasion of its neighbor. This portends that Taiwan is the next meal on the global plate. Unfortunately, two other state actors have season tickets: Iran and North Korea. Iran’s drone fleet is impressive and has caused other Gulf states’ inventories to escalate (UAE, Kingdom of Saudi Arabia, Egypt, Iraq, Jordan, Israel) (Barrie, 2021). North Korea (NK) lies about its air power. However, one report states that NK will have drones with stealth capability. (Choi, 2021) Maybe. According to Datablog, the US has the most drones and is best equipped for warfare. China, of course, might dispute these statistics. (DATABLOG, 2012)[2][3]However, carrying a big stick doesn’t count anymore in the UAS’s future military play without the will to use it.

Our Wildcat team is composed of some impressive SMEs. We divided the work into four sections. Section 1 covers Chemical, Biological, Radiation, Nuclear, Explosive (CBRNE) weapons and payloads delivered by unmanned vehicles. Here we look at the technologies and damage delivered by drones as mini weapons of mass destruction and disruption. Chapter 7 concentrates on Deception and how drones can be used in PSYOPS and INFOWAR. Section 2 concentrates on Directed Energy Weapons (DEW), projectiles payloads, satellite killers, port disrupters, and cyberweapons against CBRN assets. Section 3 looks at policy considerations, risk assessments of threats and vulnerabilities of drone-based WMDD / DEW, practical crime scene investigations for hot zones, and unique challenges of responding to bioterrorism and chemical threats and attacks delivered by drones. Our final Section 4 concludes with social networking implications and DRONESEC security and tracking tools of the trade.

Over two years of solid research by a team of eleven SMEs is incorporated into our book. We trust you will enjoy reading it as much as we have in its writing. There are nightmares aplenty.

Available as free eBook at: https://newprairiepress.org/ebooks/46/